Home  - News & Events Overview  -  CY-Biobank: Towards the Establishment of a Research and Innovation Center of Excellence for Biobanking and Biomedical Research at the University of Cyprus

CY-Biobank: Towards the Establishment of a Research and Innovation Center of Excellence for Biobanking and Biomedical Research at the University of Cyprus

The archiving of biological material for studying the human genome (DNA) of Cypriot volunteers (healthy and patients’ cohorts) is under way, with the aim of diagnosis, prognosis and treatment of diseases as well as further development of innovative research.
—–
The two-day Kick-off event of the Project “Development of a Modern Biobank and the Cyprus Human Genome Project” (CY-Biobank) for the creation of a Center of Excellence at the University of Cyprus, with the aim to enhance the Next Generation Biomedical Research and Detailed Study of the Human Genome – (DNA of Cypriots) took place on the 26 and 27th of November 2019 at the “Nikos K. Shakolas” Amphitheater of the University of Cyprus Clinical Educational Center, in the presence of civil servants, European Commissioner, European Commission Research Executive Agency (REA), doctors, experts, patients, and the public. The project is co-financed with 15 million euros from the European Commission, 15 million euros from the Republic of Cyprus and 8 million euros from the University of Cyprus over a 15-year period.

Vice President of the Council of the University of Cyprus, Mr Andreas Panagiotou in his welcoming speech mentioned, that the recent funding of the CY-Biobank program by the European Commission under the Horizon 2020/ Teaming program, coordinated by Professor Deltas, is a further proof that the University of Cyprus is pursuing excellence and innovation, launching the next generation of biomedical research in Cyprus. Mr Panagiotou stated ‘As a public institution we are interested in the social impact of the research conducted in our laboratories and the CY-Biobank project is an exemplary project that is intended to have an impact on both the medical and social sectors, as it promises a better future for patients’.

On behalf of the President of the Republic of Cyprus, Mr Kyriakos Kokkinos, President of the Foundation for Research and Innovation (IDEK) and Head Research and Innovation Scientist, addressed the PA, saying that the success of the CY-Biobank project is another important milestone in the history of research in Cyprus, a success that also reflects the high quality of human capital and research in our country. “The success of the Center is of paramount importance for research and development in the innovation ecosystem, as well as for our national healthcare system, helping support research on genetic diseases and the well-being of Cypriot citizens. Recognizing the potential of the CY-Biobank project to positively influence genetic research and improve national innovation, the Government of the Republic will support the establishment of the Center and its operation for a period of 15 years. In addition to the €15m in financial support, the government is committed to supporting the successful implementation of CY-Biobank through practical measures” Mr Kokkinos mentioned.

The floor was then taken by took Dr Karina Firkaviciute, Policy Officer at the European Commission’s Directorate-General for Research and Innovation, who congratulated the partners and researchers of the project, and stated the importance of engagement, continuity and sustainability of the project beyond the European funding, as well as its expected impact on the Cypriot society.

Project Coordinator of the CY-Biobank project, Professor of Genetics Constantinos Deltas, Director of the Molecular Medicine Research Center (MMRC), took the floor presenting the project in detail. Professor Deltas referred to the MITOS program, which has already begun enrolling volunteers at the Biobank. More than 1,000 volunteers are being sought to provide biological material that will allow researchers to study unique characteristics of the Cypriot DNA. This program invites people over the age of 18 to participate, giving biological material in complete confidentiality. The program will provide a detailed study of the DNA of Cypriots in order to identify unique characteristics and mutations in Cypriot DNA that are responsible for genetic diseases, rare or frequent, and to facilitate further diagnosis and tailored patient treatments.

On behalf of the European Commission’s Research Executive Agency (REA), Mr Ales Fiala, Head of Unit at the REA, attended and spoke at the kick-off event, while specialized presentations and discussions led by academics and researchers presenting the project’s Work packages were given during the two-day workshop.

Important conclusions include specific measures to be taken to address problems related to the new project’s housing and implementation of the electronic health record, a project to be implemented by Professor Christos Schiza’s e-Health team at the Department of Computer Science, University of Cyprus. 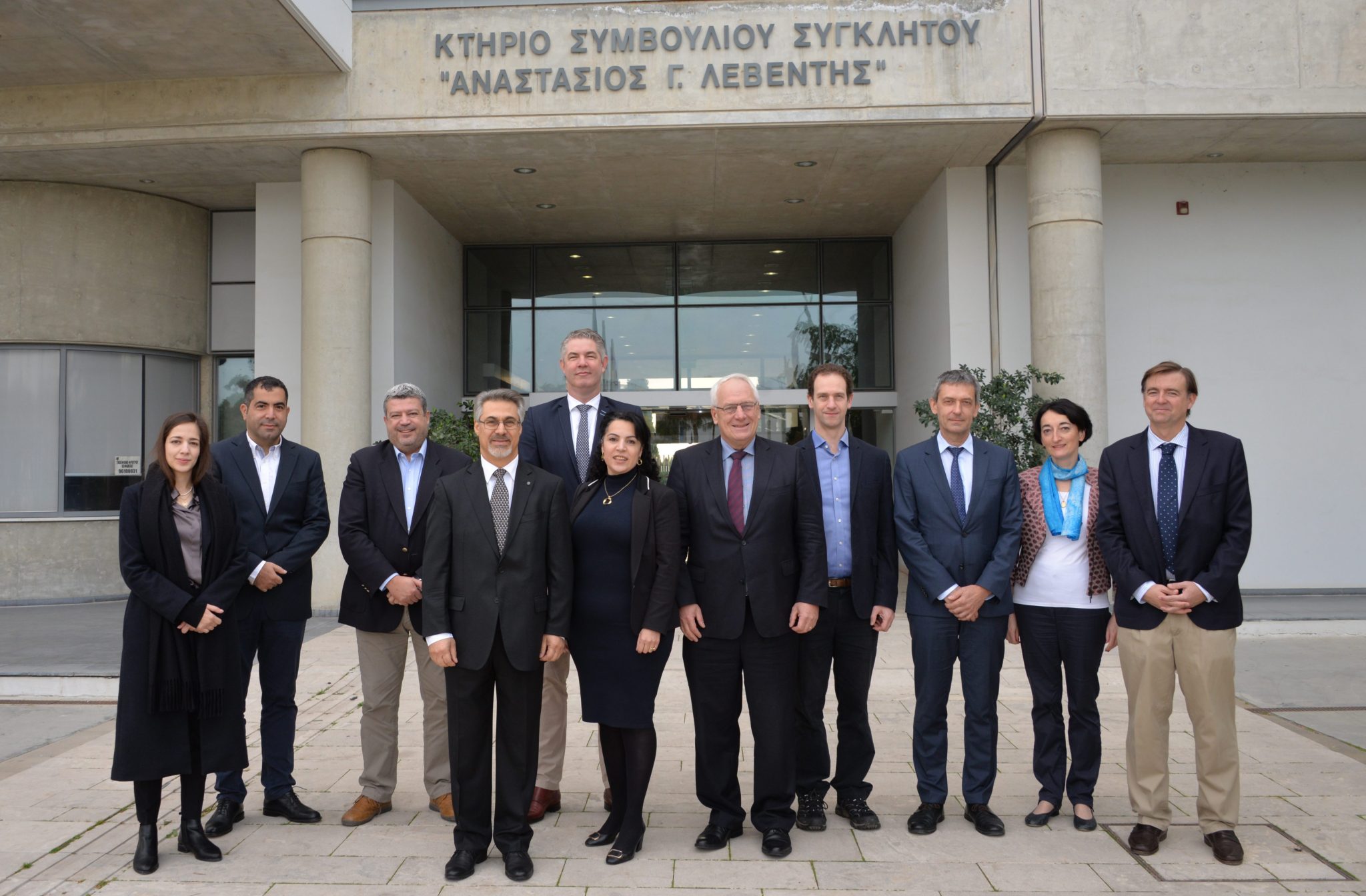 Project Partners at the Kick-Off Meeting for the CY-Biobank project, November 2019