“We must plant the idea in pathologists’ heads!” 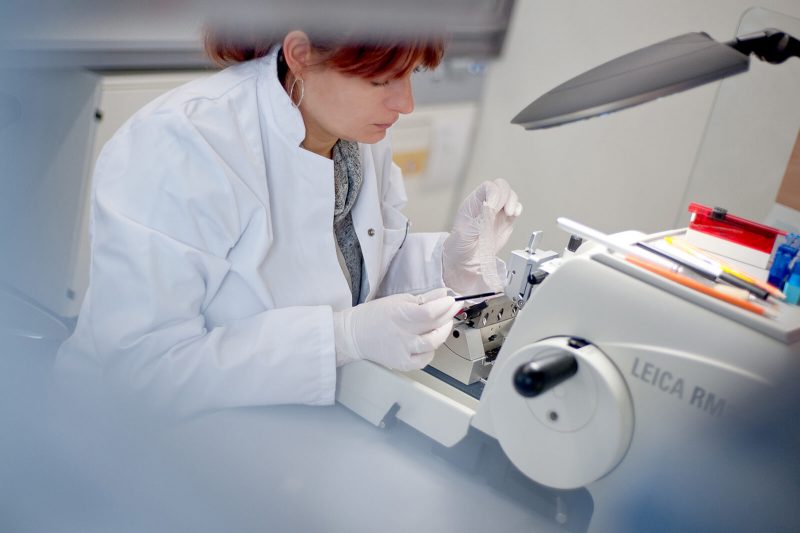 Prof. Dr. med. Esther Herpel has been head of the tissue bank at the National Tumour Centre (NCT) based at Heidelberg University Hospital – a member of the German Biobank Alliance (GBA) – since 2008. She studied medicine at the University of Heidelberg from 1998 to 2004 before going on to obtain her licence to practice medicine and her doctorate in 2004. Herpel worked as an assistant physician at the Institute of Pathology in Heidelberg, became a senior physician in 2013 and completed her Habilitation in 2017. We spoke with Herpel about cooperation between pathologists and biobanks.

Ms. Herpel, what are the tasks of pathology?

Esther Herpel: Pathology is the science of diseases. All tissue samples taken from the human body are examined by pathologists. They examine why something has had to be removed: was it inflammation or cancer, for example? This is necessary to determine a patient’s further treatment. A classic example from cancer diagnostics is so-called tumour staging, which is carried out by a pathologist. The clinician learns in this way whether further treatment such as chemotherapy or radiotherapy is necessary. Pathology has today progressed so far that the molecular level can also be investigated – so the genetic profile of cancer tissue, for instance. With certain types of cancer, if the pathologist discovers a mutation, the clinician can begin the appropriate treatment to counteract this.

Why is cooperation between biobanks and pathology so important?

Herpel: Studies have shown that in many cases, biosamples used for medical research projects were entirely unsuitable for this. They had obviously not been processed and stored under quality-assured conditions. One reason for this is so-called “wild biobanking”: it sometimes happens, for example, that a surgeon freezes a piece of liver tissue for research purposes that they assume is tumour tissue – without a professional inspection having first been conducted on the material. A few years later, the sample is used in a research project without further analysis, so without histopathological verification by a pathologist. “Fake” samples and generated data thus come into circulation and sometimes lead to false or non-reproducible research results. This example shows how important the professional processing and storage of biosamples by biobanks and pathologists is – it is a question of quality assurance.

What role do pathologists play exactly in this process?

Herpel: Suppose a scientist requires colon cancer samples with certain histopathological characteristics for a research project. A pathologist is then needed, as they know which criteria must be considered when selecting the tissue. Specifically, the tumour cell count can only be determined with a histological section; this information is indispensable for most analyses and can only be provided by a pathologist. In biobanking, pathologists should in principle always be responsible for sectioning the respective tissues, freezing them according to quality assurance criteria and, above all, conducting the appropriate exit controls.

Do different forms of cooperation exist?

Herpel: Actually, for tissue biobanking, a very close relationship with pathologists is essential. At best, such biobanks are based within pathology, as this reduces both the distances and the processing times for tissue samples. There are experts for pancreatic cancer or lung cancer on site, for example, who can all easily be consulted. This corresponds with our concept in Heidelberg: we are not just a “bank”, but also advise and supervise projects – such as when it comes to evaluating the data. There are of course biobanks that pursue another model and only offer the storage and supply of biosamples. However, I believe that if we want to guarantee the long-term success of biobanks, then we must be intrinsically involved in projects.

What interest do pathologists have in biobanks?

Herpel: It depends a lot on where they work. Pathologists working at large hospitals and university facilities whose biobanks also belong to the German Biobank Alliance are usually aware of the value and benefits of biobanks, as they often conduct their own research and rely on biomaterials. However, there are also many practising pathologists, who focus on diagnostics rather than research. Biobanks are essentially of little relevance to them – or their use would involve significant costs. So ultimately, only large institutions are in a position to provide sustainable financing for biobanking in the long term.

What can we do if the cooperation between biobanks and pathologists does not run so smoothly and what reasons might there be for this?

Herpel: Pathologists make diagnoses – and that involves work. Some clinicians use texts taken from pathological findings for publications without first asking the pathologists involved for their consent. This is just one example of something that can affect the cooperation. And another reason why there must be a rethink. Biobanking should also become an intrinsic part of clinical care. Biobankers, pathologists and clinicians must work together!

How can we at GBA involve pathologists more in our activities?

Herpel: For one, GBA should try to increase the interaction with pathologists. At the annual working group meetings, for example, or during seminar series at pathological institutes. In the first few years after we established the biobank in Heidelberg, we visited countless clinics and the DKFZ, and presented the biobank there during training courses and morning meetings. I find it particularly important to address future pathologists – through the academies for young researchers run by the German Society of Pathology (DGP) and the International Academy of Pathology (IAP), for instance. In my opinion, the subject of biobanking should also be integrated into specialist training as this is the only way to make it a matter of course for pathologists. Because long-term, quality-assured tissue biobanking cannot function if there is no awareness for it. And so we must plant the idea in the heads of young pathologists in particular!

The interview was conducted by Verena Huth and can be found here in German.